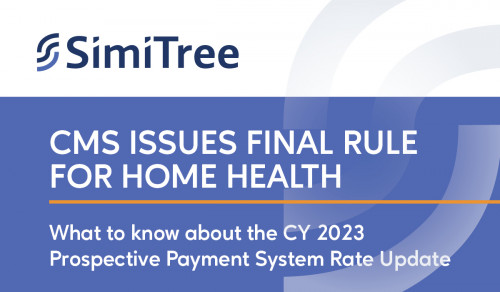 In a move many home health providers are viewing as more treat than a trick, the Centers for Medicare and Medicaid Services (CMS) issued the final rule for 2023 on Halloween, backing off its previous intention to saddle agencies with a significant rate cut next year.

The rule increases aggregate home health payments for 2023 by 0.7 percent, or an estimated $125 million, over this year’s reimbursement amounts.

"CMS is moving forward with the behavioral adjustment, despite widespread industry criticism, but it will bring some relief by using a phased-in approach that will bring about an estimated 3.9 percent decrease in 2023,” said SimiTree CEO William J. Simione.

A look at the methodology

In this summer’s proposed rule, the behavioral adjustment was introduced as a decrease of 7.69 percent. The final rule slightly tweaks that amount, updating the total at a 7.85 percent decrease.

When factoring in LUPAs, the actual decrease will be about 3.5 percent.

The estimated overall 0.7 percent increase is the result of adding together a 4.0 percent rate update percentage (up from 2.9 percent in the proposed rule) and a 0.2 percent increase reflecting the fixed dollar ratio (FDL) used to determine outlier payments, then subtracting the behavioral adjustment from that amount.

The reality of 0.7 percent

SimiTree’s financial consultants say the 0.7 increase brings a welcome measure of relief to an industry which was anticipating a 4.2 percent rate cut based on the proposed rule.

“But the reality is that the 0.7 percent increase is still squaring off against an inflationary rate running about 8 percent, with escalating labor and supply costs,” said Nick Seabrook, SimiTree Managing Principal Nick Seabrook, SVP of Consulting. “The base rate is a win compared to what was proposed in July, but agencies are still facing an uphill battle when comparing the overall payment increase to cost increases in addition to trying to manage staffing shortages.”

SimiTree consultants will share more insight and analysis over the next few weeks, offering guidance for agencies on how to deal with rising costs and tightening margins.

To receive our expert tips in your inbox each month, subscribe here to The Insider, SimiTree’s free monthly report with industry must-know information. The Best Post-Acute Healthcare News and Analysis Newsletter.

Certain diagnosis codes used for classification under PDGM were reassigned, and changes were made to functional impairment levels, comorbidity adjustment subgroups, and the FDL used for outlier payment adjustments under PDGM methodology.

The final rule also permanently establishes a 5 percent cap on negative wage index changes for home health, regardless of the underlying reason for the decrease.

Other important highlights of the final rule include the finalization of 2022 as the baseline year for the impending nationwide expansion of Value-Based Purchasing (VBP) model, and the implementation of OASIS data collection for all patients CY 2025.